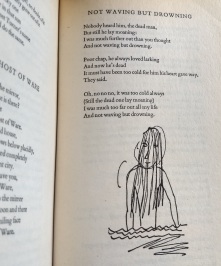 The poem ‘Not Waving but Drowning’ by Stevie Smith is only twelve lines long. Yet, the first time I read it, it created in my mind, for evermore, a whole world – and life story. Not the poet’s – or certainly not directly; no, ‘the dead one’’s:

Nobody heard him, the dead man,
But still he lay moaning:
I was much further out than you thought
And not waving but drowning.

The poem paints a vivid scene. We see a man waving; drowning; overhear words spoken perhaps in a crowd – at least, I picture a small knot of people gathering on the shore; maybe, someone quoted in the local news – a witness. (And Stevie Smith did get her original inspiration from a newspaper story, she said.) But these aren’t just casual bystanders; they also know or knew the man, at least in passing. Maybe they’re neighbours, or townsfolk, or relatives. Or all of the above.

Poor chap, he always loved larking
And now he’s dead
It must have been too cold for him his heart gave way,
They said.

Of course, it’s perfect: the lack of punctuation, that longer line, like voices speaking over themselves. And the choice of ‘his heart gave way’ (which, in another sense, it turns out, is what’s happened). The ‘larking’ also seems crucial: the front we put on to face the world…

It’s a very sad poem, of course. But also beautiful. Why? Because, of course, here’s the irony: by telling the truth about this poor ‘dead one’, the poet tells this truth for all who need to hear it (and, who knows, maybe that’s all of us?). And hearing a truth you need to, in and of itself, reduces isolation. That, at least, has been my experience.

Oh, no no no, it was too cold always
(Still the dead one lay moaning)
I was much too far out all my life
And not waving but drowning.

I’m not sure when I first read ‘Not Waving but Drowning’ – and of course the phrase and concept has so long now been absorbed into our language (surely the greatest evidence of the poem’s veracity and integrity…?) – but my Penguin copy of Stevie Smith Selected Poems edited by James MacGibbon (first published 1978) is inscribed to me from a friend in 1984. Today I turn yellowing pages…

Recently I found myself exploring my conviction that I might never have thought of attempting to write a poem of my own if Stevie Smith hadn’t written this one. (I’d always loved reading poetry – and, indeed, this little green book was given to me while I was studying English at UCL. In my second year, I even ended up living in Palmers Green, where Stevie Smith spent most of her life.) But I’d never thought seriously about trying to write a poem of my own.

Perhaps it’s an odd thing to dwell on but it’s prompted this post: answering to myself the question why, then, is that so? What is it about this short poem that mattered so much to me?

The power of this short poem

The power of this short poem to tell a truth about me. (And, maybe related, the realisation that my experiences of being alive might have relevance to someone else.) Beyond all that, the power to invigorate me, again and again, with the sheer brilliance of good writing. Of all that can be achieved by distilled crafted language – and the insights it carries. It’s not an especially clever poem (though of course it is). It’s not impressively intricate (although of course it is). It is emotionally true, and honest. It sticks its neck out – and says, clearly, the thing it has to say. And that’s something perhaps I value above all else.

Stevie Smith speaks about and reads ‘Not Waving but Drowning’ here.

‘…. A lot of people pretend, out of bravery really, that they are very jolly and ordinary… But sometimes the brave pretence breaks down and then, like the poor man in this poem, they are lost.’

poet View all posts by charlottegann

One thought on “‘I was much further out than you thought’”